I was featured in an article recently about some of the crazy things that can happen on stage.

My story STILL gives ME the shivers!

A photo of scene where my creepy-crawly experience occured!

Excited to announce the next thing I'm so excited to be a part of!
"It's A Wonderful Life: A Live Radio Play"
(not on the radio) :)
I play FOURTEEN different characters, including...
Uncle Billy
Peter Bailey
Ernie
Mr. Gower
Nick
Old Man Collins

Raise a glass and join the party! 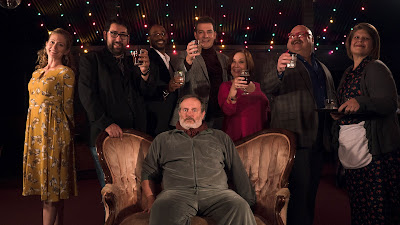 Jane. Bill. Tom. Robert. Annette. Ted. Nellie. Dick.
Join us all for an evening at the Talk House.
The painful reunion begins October 5.

"... what soon develops in this one-act is a far darker – while still comedic – story line of how politics, survival instincts and compromise can take over the lives of even the most idealistic members of the citizenry."
— Margaret Downing, Houston Press

Read the Preview piece in the Houston Press -
Evening at the Talk House: A Dystopian World
Where Theater is Not Valued

EVENING AT THE TALK HOUSE
​by WALLACE SHAWN
*Regional Premiere*

In an imagined near future, the creative team behind a critically lauded but ultimately unsuccessful play called “Midnight in a Clearing With Moon and Stars” have gathered at their old haunt, The Talk House. It’s the ten-year anniversary of what turned out to be one of the last plays ever performed. Over the course of a night spent snacking, drinking, and reminiscing, the characters begin revealing disturbing secrets about what their lives have become. The unnamed country they live in is ruled by a charming but frightening autocrat, and many people are finding themselves increasingly complicit and morally compromised in surprising and ominous ways.

Up next for me....
Turquoise by Deb Margolin
Directed by dianne k webb

Next Iteration Theater Company presents Turquoise, three plays in one, by Obie Award winning playwright, Deb Margolin and directed by Dianne K. Webb. With themes of memory, love, symbiosis, and mortality, this award-winning playwright has woven a story that reflects on the simultaneity of everything while capturing the hearts and minds of the audience with simplicity and hilarious, quick-volleying dialogue.  Turquoise is a theatrical hybrid of literary proportions not to be missed.

After the opening scene, Margolin introduces the audience to the “Guy with Nothing”—a character reminiscent of Shakespeare, Miller and Marlow but utilizing modern lingo delivered by a combative-spirited specter, an everyman. The story follows three couples: an aging married pair coping with old memories and the loss of them, two teenage boys just developing their memories and learning to bear them, and a pianist with a seven-second memory who dances with, meets, then repeatedly loses his cohort again and again.  Margolin, with scenes that resonate a “Who’s on First?” comedy sketch feel, entertains as she interlaces undertones of poetry and philosophy to create a show that will be savored and relished.

In a recent interview with NITC, Margolin wrote, “Once I realized that I was writing a play about the magnificent oneness of everything, despite our struggles to separate ourselves from animals, ants, each other: we are all living, fucking, struggling, loving, together, and we will survive or die together as a planet, I was free to delve deeply into the precise nature of each of these interconnected worlds. It is a paradigm of theater that, the more specific we are with character, the more we shed light on the entire human condition.”

Up next for me....
The Johns by Mary Bonnett
Directed by Jennifer Decker

The Johns is produced in collaboration with The National Council of Jewish Women, Greater Houston Section and United Against Human Trafficking.

This play contains graphic subject matter and is suitable for mature audiences only.

Sex trafficking seems like someone else’s problem, until an upper middle-class family in a prominent Houston area suburb finds itself ensnared. This unflinching drama explores our values raising boys to men, instant sexual gratification and its impact on women, the family and those purchased.

Originally produced in 2014 for Her Story Theater, Bonnett’s play was based on hundreds of interviews with people involved in sex trafficking in
the Chicagoland area. For the Mildred’s Umbrella production, the playwright has updated the script to set the action in The Woodlands, Texas.